I understand the hurt feelings we can have sometimes when God doesn’t come through the way we think he ought to. I’ve had them myself, frequently. But he is the king. He can do what he wants to. He is wiser than us, and he sees things we don’t. It’s better to trust him and stay engaged. 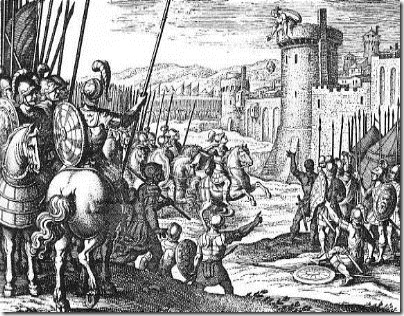 Last week we spoke of the political situation at this point in time in Ancient Israel. There are more politics here, but be patient, I think we’ll find some good stuff. After David returned, having reached out the leaders of the tribe of Judah, who were in shame, the leaders of the other tribes were offended. They had not provided the key support of Absalom’s rebellion, like Judah had; they had talked of bringing David back before Judah had. So they were offended that David reached out to Judah and gave them the honor of escorting him back to Jerusalem.

Apparently while David was returning to Jerusalem and all this was being discussed, a man named Sheba, from the tribe of Benjamin (Saul’s tribe), stepped up and said, essentially, “Fine then. If that’s how David wants it, let’s leave.”

He left, and most of the people of the other ten tribes followed him. Now, at this point, as I read this text, they were simply choosing not to escort David to Jerusalem. Most of the leaders of the tribes were willing to express their displeasure with Judah and with David’s forgiveness in this way. So they all went home and left the leaders of Judah to escort David.

But Sheba, the man who instigated the walk-out, wanted to take it one step further. He wanted to immediately start another rebellion. For David, this was one thing after another. However, Sheba was not like Absalom. This was not a carefully laid plot with long preparation. He was only able to get the Berites to join him. The “Berites” were probably citizens of the town of Beeroth in Benjamin; it was almost certainly Sheba’s hometown. So his influence was quite limited.

Even so, David thought it best to stamp out the small rebellion quickly. He didn’t want to give it a chance to spread. So he ordered his new military commander, Amasa, to gather the troops.

When Absalom rebelled, he had chosen Amasa to be his general. After the rebellion failed, one of the ways that David reached out to the tribe of Judah was by promising Amasa that he was forgiven, and that he would command the army in place of Joab. Joab had murdered Abner years before this, and at that point he had David’s tolerance, but never again did David approve of him. More recently, Joab murdered David’s own son, Absalom. Now, I know it was when they were at war with Absalom, but when Joab came upon him, the battle had already been won, and Absalom was alone, unarmed and helpless. Moreover, David had commanded Joab to capture and spare Absalom if he could. Instead, Joab killed him while he hung helpless and trapped in a tree. So Joab was in disgrace, and David wanted no more part of him.

Another reason David made Amasa the new general, was to try and mend the relationships he had with the leaders of the tribe of Judah. It was a peace offering to them, showing them he had forgiven them, restoring them to normal relations. In addition, Amasa, like Joab, was one of David’s nephews. In fact, he was Joab’s cousin.

Amasa took too long to gather the army, so in the meantime, David sent Abishai, Joab’s brother, after the rebel, with David’s personal force of elite warriors. Joab went along. Eventually, Amasa and the army he had raised, met up with David’s forces under Abishai. Joab went up to Amasa. He deliberately allowed his sword to fall out of its sheath as he approached his cousin. He bent down and picked it up, and then, still holding the sword, reached out as if to greet Amasa. Instead, he stabbed him, killing him. This was very similar to what he had done to Abner. Immediately, he took control of the whole army again. He had one his loyal followers cry out

The implication is that if you didn’t follow Joab you were against David and for the rebel that they were pursuing. Eventually, Joab’s flunky hid the body of Amasa, so it wouldn’t distract the soldiers as they marched by.

They pursued Sheba and his followers to the northern borders of Israel, where he took refuge in a walled city. There Joab negotiated with a woman with a reputation for wisdom. She begged Joab not to destroy the city. Joab made it clear that their war was against the rebel, not the city. So the citizens executed Sheba, and thus ended the rebellion, and saved their city from destruction.

Now, what do we make of this? It’s a petty, bloody and gruesome chapter in the history of Israel. What would the Lord say to us through it? Well, let’s remember that the whole bible is about Jesus. This chapter is here to show us something about Jesus, or something about ourselves and how we relate to him.

Let’s start with the people from the ten tribes. They began by insisting how much they wanted to honor David, but ended up snubbing him deliberately because they were offended and hurt by the way he forgave his enemies.

Sometimes we might be tempted to behave this way with Jesus. It’s easy to get disappointed with him when he behaves in ways we don’t expect. Sometimes it’s hard to accept that he loves our enemies as much as he loves us. Sometimes what he does or doesn’t do, or the things he allows to happen in our lives, are difficult to understand. Often we respond by withdrawing from him. Maybe we aren’t overtly rejecting him or rebelling, but we just “go home.” We back off. I understand the hurt feelings we can have sometimes when God doesn’t come through the way we think he ought to. I’ve had them myself, frequently. But he is the king. He can do what he wants to. He is wiser than us, and he sees things we don’t. It’s better to trust him and stay engaged.

Maybe it’s not even Jesus himself, but something he’s doing that he wanted us to be involved in. For example, suppose you feel called to help out with a ministry to the poor. You do, and you truly make a significant difference, but no one recognizes your efforts. In the meantime, they honor people who seem to deserve it less than you. So you back off. I understand backing off a situation like that. But the question is: did the Lord call you to back off, or are you just withdrawing because your feelings were hurt? That can be tough, but the way of maturity in Jesus is to listen to him more than your emotions.

What about Joab? Joab comes across as someone who was always loyal to David, even though David did things he didn’t like. But was it really loyalty? He was loyal when he agreed with David. But we see now, for at least the third time, that when Joab had different ideas, he chose his own way. He did what he wanted, no matter what the king commanded. Loyalty and submission to leadership are only really revealed in hardship and especially in disagreement. But whenever there was disagreement, Joab chose himself over David.

By and large, Joab looked like a loyal and faithful servant. And, throughout his life, he did a lot for David. But ultimately, he did not buy into who David was and what he was all about. He was offended by David’s compassion and forgiveness. He liked the part where they got to kill their enemies together. He didn’t like the forgiveness part, so he didn’t do that, and he did not let David’s will thwart his own designs. Joab was aligned with the right side. But his heart was all about Joab and what he felt and what he wanted. He did not actually accept David’s wisdom and judgment if it was different from his own.

Sometimes Christians can be that way with Jesus. Usually, these days, it is the reverse of Joab. We like the love and forgiveness stuff. But when it comes to giving up our favorite sins, we choose our own way. Or maybe we’re fine to go to church and sing songs. But when it comes to forgiving someone who has hurt us badly, we hold on to the right to nurse our grudges. We like to be perceived by others as believers, but we won’t listen to the Spirit’s call to be intimately involved in the lives of other believers, or to study the bible. Jesus said something very scary in Matthew chapter seven:

“Not everyone who says to Me, ‘Lord, Lord! ’ will enter the kingdom of heaven, but only the one who does the will of My Father in heaven. On that day many will say to Me, ‘Lord, Lord, didn’t we prophesy in Your name, drive out demons in Your name, and do many miracles in Your name? ’ Then I will announce to them, ‘I never knew you! Depart from Me, you lawbreakers!’” (Matt 7:21-23, HCSB)

You can look like a Christian, act like a Christian and talk like one, but not really allow Jesus to change your life. You can even do things for Jesus, but those things won’t count if you don’t really receive him as your savior and king. Joab looked like a friend, but his actions revealed him here as someone completely separated from David and his values. We see how terrible and ugly that was in Joab. We see that the fruit of it was pure evil. The same is true for us: the fruit of our own self-will when it is asserted as better than the will of Jesus, is never good.

Finally, consider the wise woman in the town of Abel. At first, they probably received Sheba into their town willingly. But when the realized the destruction he would bring and that there was no righteousness to his cause, they were willing to get rid of him in a very final way.

This also reminds me of something Jesus said:

The people of Abel realized that they had something in their midst that would lead to their downfall. They got rid of it with awful finality. Sometimes maybe we need to something similar. Maybe you have a habit of going out after work and having a few drinks before you head home. Maybe you fudge the numbers a little bit at work. Perhaps you have some activity or habit that seems OK at first, and you like it, but Jesus has made you aware that this is a problem in your life. The time to get rid of it is right now, with finality. The people of Abel were considered wise for choosing to get rid of the rebel rather than having their town destroyed. We too, sometimes need to make a wise choice that is hard, even drastic.

Let the Spirit speak to you through the text today.