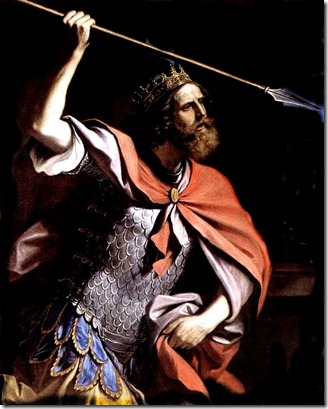 Christians need to recognized that we are not in neutral territory. We are in the middle of a spiritual war.

1 Samuel chapter 18 is part of a larger section that records the development of David as a warrior and leader, and the increasing tension between Saul and David.

In number 10 in this series, we looked at 1 Samuel chapter 14, and saw that Jonathan, son of Saul was a very different man from his father. Jonathan was a man of faith. He trusted that if God wanted to deliver his people, he could do it, whatever the odds. I have wondered at times, why Jonathan, being the man he was, did not fight Goliath. The bible doesn’t tell us, but I suspect that Saul might have forbidden him to do it. In any case, it was God’s desire to use David in that situation.

David approached Goliath with exactly the same kind of faith that Jonathan had when fought the Philistines earlier. Jonathan recognized the faith of David and recognized in him, a kindred spirit. Without any pretensions as the king’s son, and in self-confident humility, Jonathan honored David and made a covenant with him. A “covenant” was a solemn agreement. It doesn’t spell out here what exactly the covenant was. I think we can assume that it was a little bit like the old native American tradition of becoming blood brothers. Certainly, they became lifelong friends, inseparable in spirit, loyal to each other in spite of the difficult circumstances that could have come between them. In addition, after the victory over Goliath and the Philistine armies, Jonathan gave David his precious iron-age battle equipment.

Saul had made a vow to honor the giant-killer with marriage to his daughter, and riches, and exemption from royal taxes (17:24-27). But there is a great contrast between Saul and his son. Jonathan made no vow, and yet rewarded David with honor, and such gifts as he had power to give. Saul made promises, and then reneged on them.

After Goliath was killed, the armies of Israel pursued the Philistines to the gates of two of their cities. Previously, Israel had won only defensive victories – they had driven the Philistines out of the hill country when the Philistines invaded. However, this time, spurred by David’s feat of faith, they took the battle into Philistine territory. As they returned from the fight, the people celebrated and sang songs and verses. In their songs they sang that Saul had killed thousands, and David tens of thousands.

This was a faith opportunity for Saul. He could trust that God was Lord of both him and David, and that God would be merciful and good to him even now. But instead, Saul gave in to fear and doubt and insecurity – as he always did. 18:10 says this:

10 The next day an evil spirit sent from God took control of Saul, and he began to rave inside the palace. David was playing the lyre as usual, but Saul was holding a spear, 11 and he threw it, thinking, “I’ll pin David to the wall.” But David got away from him twice. (1Sam 18:10-11, HCSB)

Previously, when the Lord used the evil spirit to try and bring Saul to repentance, Saul was able to find hope and relief by God’s spirit working through David’s music. But this time, Saul utterly rejected God’s spirit. He chose to not live by faith. He chose to try and control his own fate, apart from God’s plans. And so when David played the lyre for him after this, there was no relief, because Saul cut off all of God’s efforts to reach him.

I want to point out a few things that come out of this particular incident. First, when we close the door on God, it means we open a door to the realm of Satan and evil spirits. I don’t mean that this happens every time we make a single mistake and choose wrongly or fall into sin. But Saul persistently and deliberately rejected God over a long period of time. It seems to me that chapter 18 records a time when Saul makes a firm, final decision to not trust God. Therefore, God had no way to reach him anymore. And since Saul put himself beyond God’s reach, he was a sitting duck for the devil.

I think it is important for us to recognize the spiritual war that this reveals. David was aware of it in the battle against Goliath. Jonathan was aware of it in his earlier battles. The devil wants to destroy the work of God. Jesus said, talking about Satan in John 10:10 said, “a thief comes to kill, steal and destroy.” Peter wrote this:

8 Be serious! Be alert! Your adversary the Devil is prowling around like a roaring lion, looking for anyone he can devour. (1Pet 5:8, HCSB)

This world is not neutral territory – it is a battle ground. All of us who trust in Jesus are now the chosen instruments of the Holy Spirit. The devil cannot kill us all. But he seeks to undo the work that God wants to do in and through us. We don’t need to fear the devil – Jesus told us that he has won the definitive victory over Satan.

18 And he said to them, “I saw Satan fall like lightning from heaven. 19 Behold, I have given you authority to tread on serpents and scorpions, and over all the power of the enemy, and nothing shall hurt you. 20 Nevertheless, do not rejoice in this, that the spirits are subject to you, but rejoice that your names are written in heaven.” (Luke 10:18-20, ESV)

Satan cannot harm us if we remain in Jesus. Therefore the New Testament tells us to be alert (1 Peter 5:8), to remain in Jesus (John 15:1), to resist the devil (1 Peter 5:9 and James 4:7) and to take our stand against all the powers of evil in the spiritual realms (Ephesians 6:10-18). We don’t need to be afraid, but we shouldn’t be naïve either. If the devil could, he would drive a spear through you too. Saul shows us the only way the devil can get at us – when we shut God out.

When you feel particularly angry, ask yourself – is my anger level unreasonable? Could the devil be tweaking an already tense situation? Perhaps you feel a weight of sadness and depression that is out of proportion to the situation you are in. Pay attention to it. Don’t just submit to it and let it hang like a cloud over your life – ask the Lord about it. Maybe when you try to move ahead with what the Lord has for you, you encounter continual discouragement — maybe even physical roadblocks. Don’t just accept this. Ask the Lord about it, and you may need to pray specifically against spiritual opposition. Satan’s biggest weapon is deception. If he can get us to believe he isn’t involved, we will never kick him out of places where he doesn’t belong.

Consider David for a moment. He was God’s chosen instrument. He killed the giant. But after the party, the biggest result is that now the king hates him. Reading on, we see more opposition. Saul promised his eldest daughter in marriage to the giant killer. But he reneged on it, and had her marry someone else. As it turns out, that was OK, because Saul’s younger daughter, Michal, loved David. When this came up, Saul, no doubt realizing that not keeping his promises would make him unpopular, proposes that those two marry.

Now, in those days, in that part of the world, a prospective groom was supposed to give goods and property to the father of the bride. This gift was called the “Bride Price.” They did the same thing in Papua New Guinea where I grew up. In New Guinea, the price was usually paid in livestock and other property, and ancient Israel was probably similar. In chapter 17, the wording implies that killing Goliath is more or less equal to providing the bride price. However, in chapter 18:23-25, an additional bride price was clearly part of the negotiations. David said basically, he couldn’t afford to become the king’s son in law. This means two things: first, Saul is now requiring something more from David than the death of Goliath. Second, it means that Saul also went back on his promise to make the giant killer a wealthy man (17:25) – since David had no resources to pay the Bride price.

Saul now requires a new price – that David kill 100 Philistines, and bring back a certain gruesome proof of each death. He was hoping that the extreme danger involved in doing this would actually put an end to David.

None of this is fair. None of Saul’s treatment of David from here on out is righteous or godly. David is God’s chosen instrument – and yet through Saul, the devil is continually cheating him and threatening his life.

Even so, David did not become bitter, or even disrespectful toward Saul. He did not even confront him about his false promises. He continued to trust the Lord to work in him and through him. He continued to do what the Lord put in front of him to do. And through the Lord, he was protected and blessed in his endeavors. He and his men killed not 100, but 200 Philistines. While he remained trusting in the Lord, the devil could not get to him.

So I have a few thoughts for application here. Are you engaged in the mission that God wants to accomplish through your life? If you don’t know, I challenge you to pause and ask God about it right now. If you know you aren’t, I want to warn you that you are endangering the work of God, and yourself.

In addition, when we are letting the Lord live his life through us, we ought to heed the warnings of the New Testament. We need to be alert and aware that the devil is out to attack the work of the Holy Spirit. He wants to stop you from experiencing grace. He wants to stop you from the mission God has for your life – from touching others the way God wants you to. We aren’t in neutral territory – we need to be aware that the devil will try to use every discouragement, every burst of anger, unforgiveness, hate, envy, discord – anything we do not turn over to the Lord.