Judgment always has this purpose: to turn people back to God, where they can find joy and grace.

This is yet one more of those difficult passages in Samuel. Thankfully, it is the very last chapter of the book J. Even so, as with the other difficult parts, there are rich and grace-filled lessons to be learned here.

This same incident is also recorded in 1 Chronicles 21. I’ll be using both passages to help us understand. It says here that the Lord was angry at Israel, and stirred up David to take a census. In Chronicles, it says that Satan, plotting against Israel, incited David to sin by taking a census. Either way, we can see that the consequence of David’s sin was that all Israel suffered. I think one of the first questions should be, “Was it God or was it Satan?” As I have mentioned in previous messages, there are several other places in the Old Testament where the Lord used evil spirits to accomplish his purposes: Judges 9:23-24, 1 Kings 22:18-23 1 Samuel 16:14, and Job 1:6-12. In each case the picture we get is the Lord allowing an evil spirit to affect a particular person or group. In each case, the evil spirit wants to do the evil, but must get permission from God first. God’s permission seems to be limited to what will accomplish his purpose. In most of these cases, the purpose is to bring judgment, and if possible, repentance. [For a longer discussion of this issue please go to one of my previous sermons: Does God Send Evil Spirits?]

So it is entirely consistent to see God allowing a limited evil influence upon David in order to accomplish his purposes. It was Satan who tempted David, but it was ultimately God who allowed it. The answer to our first question then is: both. It was both God and the devil.

The next natural question is, “Why did God let this happen?” My most honest answer is, “I don’t know for sure.” I do have some ideas, however.

Clearly, the Lord felt that there was something not right in David’s heart – and also not right in the hearts of the people. Let’s start with an clear biblical understanding of sin and punishment and judgment. There is only one satisfactory and just punishment for sin. According to the Bible that one appropriate punishment is eternal separation from God. Since God is the source of all Life and all Good, that separation means death and unimaginable suffering. So if David and the people of Israel were not killed and sent away from God’s presence forever (that is, hell) then they were not being punished for doing wrong. They were being judged. There is a difference. In fact, it was God’s punishment for our sins that Jesus took upon himself.

In the Bible, God’s judgment establishes that his actions are right and good, and that ours are wrong and sinful. God uses judgment to try and get people to repent and turn to Him and receive life, hope and forgiveness in Jesus. Judgment always has this purpose: to turn people back to God. It isn’t vindictiveness or anger or even righteous punishment. It is an extreme measure of love. It is like amputating a limb to keep the deadly cancer from spreading, or taking the cars keys away from someone who drinks too much. It seems harsh, but it is intended for good, for love.

So God allowed the sin in the hearts of David and his people to be revealed through temptation, and then he brought judgment to turn them back to Himself.

When I was fifteen I tore open the back of my heel in accident, and had to have stitches. The wound became infected. It sealed up on the outside, but underneath, it was filled pus and infection. Left alone, it would have looked all right, but eventually it would have developed gangrene and rotted my foot and leg, finally killing me. My dad realized what was happening. He made me lie down, while he clamped my leg to hold it still. He squeezed around the wound and it was incredibly painful. The wound burst open and what came out was truly disgusting. For almost a week afterward I had a gaping hole in my heel. I still have a scar. But it was absolutely necessary that the infection be exposed and cleaned out.

So, the Lord exposed what was hidden in the hearts of David and of the people, and then cleaned the infection, though it was a painful, awful-seeming process. My dad inflicted pain upon me in order to bring about my healing. He didn’t cause the infection, but he did cause me pain in order to first expose it, and then eliminate it. So God did not cause the problem in the hearts of his people, but he loved them enough to engage in the painful process of exposing it and judging it, to bring them back to himself.

Now, another question that I have is, what was so bad about taking a census? Moses did it twice – because God told him to. So why shouldn’t David do it? How did the census expose the sin of David and of Israel? I think this is an important question to ask.

I want to admit, this part is speculative. Here are some possible reasons. Perhaps it was pride. Maybe David wanted to know how great his kingdom was. Or maybe he was contemplating a new conquest that was not sanctioned by the Lord, and he wanted to know if his army was big enough to do it. Another possibility is that he was afraid of another rebellion, and was using the census to ferret out any potential enemies. The men of Judah and those of the other tribes were recorded separately. So maybe David was afraid, and was trying to see if the men of Judah had enough soldiers to defeat the other tribes if it came to civil war again.

In any case, it did not arise from faith. Romans 14:23 says: “For whatever does not proceed from faith is sin.” We want a book of rules, so we can just take care of things on our own, and not make the effort of staying close to the Lord. Rule 447, paragraph 8, section c: “Do not ever take a census.” But living that way actually separates us from God, because it allows us to function “righteously” without really interacting with him. Even if we do the right thing, it needs to be because we are living in right relationship. Taking a census is not always wrong. But David was not walking in faith.

Here is one other possibility with this census. It could be that David ordered it to be conducted in a way that violated something the Lord said in Exodus 30:11-16.

The point of this was to recognize that the Lord owns all of the people. They don’t own themselves – they owe their lives to the Lord. In the same way, no leader owns the people – they all belong to God. It may be that the people did not want to pay the census fee, nor did David want to require it of them. This exposed that in their hearts they were not serious about belonging to God as a people. This may be the sin in the hearts of the poeple that God was exposing.

With the sin exposed, God acted in judgment, to bring the people back to himself. Because David repented so quickly, the Lord gave David a choice about the form of judgment: three months more of rebellion and battle, or three years of famine, or three days of a plague. David chose the last one, as I would have. He trusted God’s mercy (in the form of the plague) more than the “mercy” of a human enemy.

As the plague was coming to Jerusalem, David apparently had a vision of God’s angel striking the people. He cried out for mercy for them, pleading with God to limit the judgment to himself, to strike him and save the people. God did not do that, but he did end the plague at that point. The angel in the vision stopped. David’s plea to be punished instead of the people echoes the heart of the ultimate chosen one, Jesus, whom God did strike in place of all sinful people.

What follows is very interesting. The Lord sent the prophet Gad, who told David to make sacrifices and offerings on the spot where he saw the angel stop. If you remember, Jerusalem in David’s time was fairly small, maybe ten or fifteen acres. It was on the tip of a ridge, with deep ravines to the east and west and south. Behind David’s city to the north, the ridge rose to the top of the mountain. It was there, at the top of that ridge or mountain, where David went to offer his sacrifices. This was about 1/3 of a mile from the south wall. The picture below gives you a rough sense of the geography, though it is not 100% accurate. 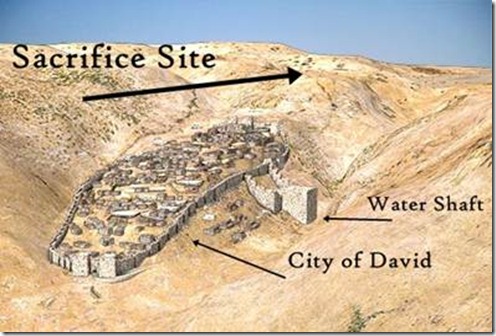 He found the land was owned by a Jebusite, not an Israelite. Refusing to take it as a gift, David purchased the land, and made offerings and sacrifices there. This ridge-top was the very place where Abraham had taken his son Isaac, when he obeyed God’s call to sacrifice him. On that mountaintop, Isaac, not knowing what was to come, asked what they were going to use for a sacrifice. Abraham answered prophetically, saying, “God Himself will provide the lamb for the burnt offering, my son.” (Gen 22:8, HCSB). God stopped Abraham when he saw that he was willing to give up even his son. Instead, God planned to give his own son. And so on this same spot, almost eight hundred years later, the plague was stopped. On this same spot, David offered his life in exchange for his people, but again, the Lord refused that sacrifice, looking ahead to the time he would offer his own son. And this same spot, purchased by David, Solomon built the temple of the Lord, where for years they offered sacrifices that were all a shadow, pointing toward the ultimate sacrifice of Jesus to save people from their sins.

So David ended his reign, still being used by the Lord to point toward the ultimate messiah. 2 Samuel 23 records the last psalm he wrote:

The Spirit of the LORD spoke through me, His word was on my tongue.

The God of Israel spoke; the Rock of Israel said to me, “The one who rules the people with justice, who rules in the fear of God, is like the morning light when the sun rises on a cloudless morning, the glisten of rain on sprouting grass.

Is it not true my house is with God? For He has established an everlasting covenant with me, ordered and secured in every detail.