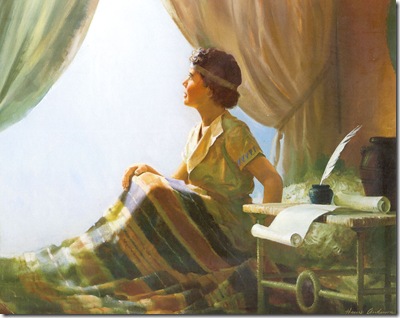 1 The boy Samuel served the LORD in Eli’s presence. In those days the word of the LORD was rare and prophetic visions were not widespread.

Times were bad in Israel. There was an old man who was supposed to teach everyone about God, kind of like a pastor, except he was the pastor for the whole country. His name was Eli. Eli had two sons, named Hophni and Phineas. These two sons were grown men, and they were supposed to help their father Eli with the work of teaching people about God and leading them in worship. Instead, they made everyone do what they wanted them to. They took food from people who had saved money all year so they could bring the food to the place of worship and celebrate with God. When people complained, Hophni and Phineas told them that they were working for God, and so the people had to do what they said. They did even worse things than taking food.

Their father Eli did not stop them. He told them that what they did was wrong, but they didn’t stop doing it, and Eli didn’t do anything more about it. As we look at 1 Samuel chapters 1-3, it seems like Eli is not a bad man, but he was weak-willed and he did not do a good job raising his own children.

This wasn’t the only reason times were bad. The text says, “In those days the word of the Lord was rare and prophetic visions were not widespread.” In other words, no one was paying attention to God, and so no one knew what he wanted to say or do. Jeremiah 29:13-14 says this:

Jesus put it this way:

So God says, if you look for him, you’ll find him, if you are looking with all your heart. If you want to hear what says, you will, if you really truly want to, and you listen to what he says in the Bible, and when he speaks in your heart. But in those days, no one was doing that.So it wasn’t because God was ignoring his people. People didn’t hear from God because they weren’t listening. They did not really truly want to know God better; they didn’t really want to know what he had to say to them.

But one person started to listen. It wasn’t Hophni and Phineas, the bad priests who were abusing their power and position. It wasn’t Eli, the old man who was supposed to lead the country in following God. It wasn’t a mighty warrior or a great scholar.

The one person who started to listen was a young boy. His name was Samuel. Last week we learned how his mother held on to her desire to have a son, abut also surrendered that desire to God. Because of that, after Samuel was born, when he was about three years old, she let God adopt him. Of course it was Eli, the old chief priest who took care of him and taught him at the house of God, but it was really as if Samuel was adopted by God. When Samuel started to listen to God, he was still only a young boy. Both the Hebrew Text and the Greek Old Testament (called the Septuagint) agree on this point. The Greek uses a word that means “young child.” The Hebrew uses a word that can mean any child younger than thirteen years old. But he is definitely not a grown up; not even a teenager. It isn’t any more specific than that. He could have been twelve years old, or he could have been six. But we know he was only a kid.

Many of us know the story. It is right there in 1 Samuel chapter 3. One night Samuel was sleeping and he heard a voice call him. He thought it was Eli, the old priest. Now Eli took care of Samuel, and made sure he was fed and washed, taken care of educated. But Samuel also took care of Eli, because Eli could not see very well. So Samuel thought it was Eli who called him. Maybe Eli need some help finding something or walking somewhere in the dark. Probably there were times when Eli did call him to come help for things like that.

So Samuel got up to see what Eli needed. Only Eli had not called him. He sent Samuel back to bed. A little while later, Samuel heard a voice calling his name again. He got up and ran to Eli once more. Once more Eli sent him back to bed.

Then it happened again. Eli had his problems, but he wasn’t an entirely bad person, and it seemed like when he was caring for Samuel, he avoided the mistakes he must have made with his own sons. Eli realized that it must be God speaking to Samuel. So he sent Samuel back again, but this time, he told Samuel to ask God to keep speaking, and to listen to what God says.

Now there is something interesting about this story. I think a lot of people feel that if God speaks to them, it is going to be easy to hear him and easy to know that it IS God who is giving them the message. But that wasn’t the case with Samuel. It really was God. He was even speaking in a voice that Samuel heard audibly. Even so, it took both Samuel and Eli several tries until they realized that God was at work.

Many times, I think we don’t hear God because we think it should be easy. We think, “if God wants to say something to me, well, he can.” But that isn’t really seeking God, like Jeremiah and Jesus talked about. And even with Samuel, it took some time and energy to discern that God was speaking. It is good to not assume that everything that comes into our heads came from God. But at the same time, it is good to take a little time and energy to evaluate unusual thoughts or experiences, in case the Lord does want to speak to us through them. We evaluate it first of all through comparing what we think we heard, with the Bible. If it came from God, it won’t contradict the bible. Of course there are some things that aren’t in the bible, like what job we should take or where we should go to school. We should pray about those things too, and ask for God to speak to us, and then listen. When we think we hear something, we should talk with other Christians about it, and pray about what we heard, asking God to confirm it or not.

In Samuel’s case, what he heard was very much like something that another man of God had heard a few years before: Eli and his sons were going to be judged. The sons would be judged for the evil they were doing. Eli would be judged for allowing that evil to continue. This wasn’t actually a very nice or comforting thing to hear from God.

This is where Eli did teach Samuel an important lesson. The next morning, Samuel didn’t want to tell Eli what God said, because it was all about Eli and his family, and it was bad news for them. But Eli told Samuel that when God speaks, it is important to tell others what he said – even if it may be hard for some of them to hear. This is still true today.

And even though it was hard for Eli and his grown sons to hear, it was actually a very encouraging message for the rest of the people. Eli’s sons were bad men, and no one was stopping them. It was a good thing for the people to hear that God himself was bringing their evil ways to an end. It meant that God cared about his people, and would not let someone treat them unjustly.

So what can we learn from all this? Are you like the people of Israel in those times? Could it be that you don’t hear from God and you don’t see him at work in your life because you really haven’t devoted much time or energy to seeking him? I don’t mean this to sound judgmental or condemning. I just mean that this passage shows us a connection between hearing God and seeking God. It shows that even when God is speaking to us, it takes some effort and focus to realize that, and to hear what he is saying. It isn’t like a lightning bolt spelling something out in letters in the sky. We need to devote our attention to it.

Here’s another thing. It doesn’t matter who you are, or how old you are – God can speak to you. Samuel was a young boy. He was not and adult. He did not have the respect of a grown up or experience to convince people that they ought to listen to him. But God spoke to him. He chose him, out of all the people in Israel, to listen to God and to tell others what God was saying. You may think, “I’m just a kid,” or “I’m not a preacher” or “I don’t know much about the bible.” But all those were true of Samuel also. God can use any of us. In fact, he wants to use each one of us, in different ways.

I mentioned last time that these were some of the darkest days in the history of Israel. But because of one young boy, all that was about to change. People were going to begin to hear God again. I pray that we can all be like the young boy Samuel.

One thought on “The Boy Who Listened”